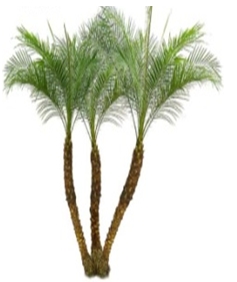 Prophet Muhammad ﷺ said: “There is none amongst the Muslims who plants a tree or sows a seed, and then a bird, or a person or an animal eats from it, but is regarded as a charitable gift for him.” Narrated by Anas bin Malik (R.A.) [1]

In yet another Hadith, the Holy Prophet ﷺ is reported to have said: “If the Final Hour comes while you have a palm-cutting in your hands and it is possible to plant it before the Hour comes, you should plant it.” Narrated by Anas bin Malik (R.A) [2]

Following the advice of the Holy Prophet ﷺ , and with a desire to make its due contribution to reducing environmental degradation and making College surroundings clean and green, RLAK CHE planned to initiate Plant Transplantation Programme in September 2015.

For a successful transplant, the college consulted some professional experts to take advice on selecting an appropriate, economical and advantageous plant species. After examining environmental factors and soil profile the experts recommended Date Palms due to following transplant-friendly characteristics of the plant:

As for the long-term advantages, Date Palms yield a large crop of fruit in harvest season. However, the Date Palms were preferred not only for the food value of the dates themselves, but also for the partial shade of the palms which would reduce sun’s glare, thereupon, shield the building from heat wave particularly during warm summers. Additionally, the leafy fronds would diffuse natural light and keep the rooms evenly bright.

Further, the experts endorsed importing Date Palms native to Balochistan, which have been believed to be adaptive and compatible with the climate of Karachi. Accordingly, the specimens were brought from Balochistan. The project was launched in mild summer season, the optimum time for Palm transplantation in subtropical regions of Southern Pakistan.

As per the plan, the college transplanted ten fully mature palms to cover the area in front of Arts and Interior Design Department in order to create a lasting artistic impression of the building.

1. Digging out and transporting: this included 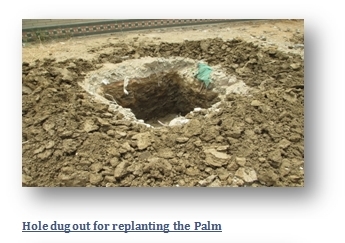 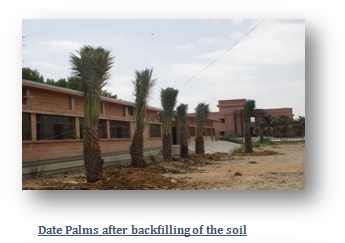 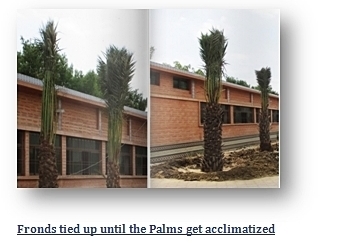 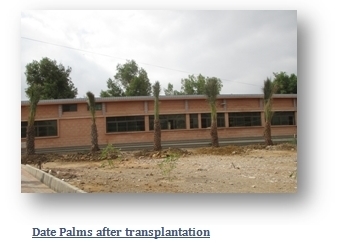 The whole process and manual labour required for it made the project a financial challenge.

However, RLAK CHE was fortunate in meeting this challenge through voluntary cooperation of the faculty members and their acquaintances. The college acknowledges the support of Mr. Muslim Raza, consultant environmentalist, Sargam Academy, for providing free-of-cost consultancy and supervision all through the transplantation process. In addition, contribution of the planters is also appreciated who pledged to replace any palm that might fail to grow properly.

RLAK CHE hopes that careful attention of the faculty and students will help the palms survive well.